The City of Bath is a must-see destination for any visitor to Somerset and makes the perfect romantic weekend break. It has lively nightlife and a wealth of hotels and restaurants to chose from. There is a lively cafe culture and street entertainment scene during the day. The compact nature of the City makes it ideal to explore on foot or, if this sounds too tiring, then join one of the open-top bus tours from which you will get a great view of all of the best attractions in Bath. The city is full of historical interest and it is home to some of the finest Georgian architecture in England for which the city has recently been granted World Heritage status.

This historic city was founded by the Romans in the first century AD. They were undoubtedly tempted by the warm spring waters that rush to the surface daily and constructed a town around the Public Baths. From the Roman Baths in the center of the city, most of the other main attractions in Bath are easily reached on foot. Near to the Baths is the Pump Room, built at the latter end of the 18th Century.

Pubs and Restaurants in Somerset 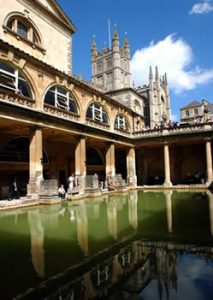 Here too can be found the Roman Museum housing many of the items found during the excavations on the site and elsewhere in the City. Close by is the 15th Century Bath Abbey which has the most magnificent stonework. Inside there is a monument to Beau Nash, the man who was largely responsible for the town’s revival in the 1700s. He was the Master of Ceremonies from 1704-1760, under his direction the City of Bath became the place to be seen among society’s gentry. The splendid Georgian architecture for which the city is famous is a tribute to these prosperous times. This is exemplified in Great Pulteney Street leading to Pulteney Bridge designed by Robert Adam with shops lining either side. The Royal Crescent and The Circus are among the best known and loved of all Baths buildings. At 40 Gay Street, off Queens Square, you can find the Jane Austen Centre, a celebration of Bath’s association with the writer.

The City of Bath has many famous connections, other historic figures that have lived here include Sir Issac Pitman, William Pitt, Gainsborough, and David Livingstone.

Bath is home to many other interesting museums. At the Assembly Rooms is the Museum of Costumes, one of the world’s largest displays, covering fashions back to Medieval times, and including exhibitions of jewelry.

At the far end of Pulteney Street is the Holbourne Museum and Crafts Study Centre. Here can be found paintings by Gainsborough, Turner, and Stubbs. There are also fine collections of silver; porcelain and glass; bronzes and enamels.

Another of the main attractions in Bath is the National Trust’s Prior Park, on the outskirts of the City. The 18th Century garden was landscaped by Capability Brown and has several follies and a lake. Here you can enjoy several miles of woodland walking, the views of Bath from the Park are breathtaking.

Hotels and Guest Houses in Somerset

The wide variety of attractions in Bath is certain to meet with your approval.