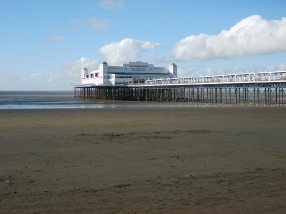 Weston-Super-Mare became established as a seaside resort in the Victorian era with the advent of the railway. Weston-Super-Mare is dominated by Worlesbury Hill which borders the entire northern edge of the town. The town’s most famous landmark is the Grand Pier.

At low tide, the sea retreats so far out that there is nothing but sand beneath the pier. Attractions in Weston-Super-Mare include traditional donkeys rides and a miniature railway. Further along the beach, there is a “Seaquarium”, where marine life can be viewed up close.

Other attractions in Weston-Super-Mare include the Helicopter Museum which is situated on the outskirts of the town. They stage an International Holidays Event at the Beach Lawns over a long weekend at the end of July. There is also an annual display by the ‘Red Arrows’ around the same time. Then there is the Playhouse Theatre which serves the seasonal tourists and the local population. The Winter Gardens on the seafront hosts shows, exhibitions, and conferences.
The Sovereign Shopping Centre provides indoor shopping with all the main high street chains represented.

Further south at Brean there are 8 miles of sandy beaches backed by dunes. Also at Brean is the Brean Leisure Park and nearby golf club. Continuing south you come to the town of Burnham-on-Sea, another popular seaside resort and home to Britain’s shortest pier. At low tide, the mudflats further out can pose a hazard when individuals have found themselves caught as the tide has come in and care must be taken. The town is also noted for its lighthouses particularly the distinctive “lighthouse on legs”.

Both Weston-Super-Mare and Burnham-on-Sea are part of the West Country Carnival, marking bonfire night, and held in early November. To the southwest of Burnham-on-Sea, is Apex Leisure and Wildlife Park. Covering 42 acres the park was created from excavated clay pits; these were flooded, and the lakes are now home to many types of wildlife and varied leisure activities.

Other attractions for children in the general area include Alstone Wildlife Park in Highbridge; the Animal Farm Adventure Park at Berrow; and Brean Down Bird Garden near Burnham-on-Sea.

Activity Breaks in the West Country

The range of attractions in Weston-Super-Mare and the surrounding area make it a great destination for a traditional seaside holiday. Weston-Super-Mare is also conveniently situated near to the M5 motorway making it easy to access all of Somerset’s other main attractions.